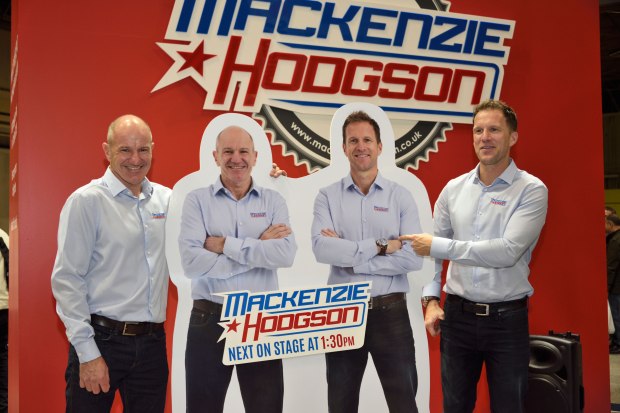 Motorcycle racers are generally a different breed – very competitive, focussed to the point of obsession, and ruthless in their quest to be number one. Becoming a national champion takes years of dedication, sweat and toil, becoming a world champion requires even more commitment. And talent.

Neil Hodgson knows what it takes to be a winner. He scooped both the BSB and WSBK titles in an illustrious career on both sides of the Atlantic before injury forced his retirement. After dislocating his shoulder in a motocross training accident in California in 2009, Hodgson landed on the same shoulder during Sunday morning warm-up for the opening round of the 2010 British Superbike Championship at Brands Hatch and knew his career was over. That, in reality, was the start of the second phase of his life. We caught up with him to see how he’s coped with life after racing…

LB: You raced from the age of eight until 36. You’ve literally grown up racing and for 20 seasons you had your life mapped out for you. And then the rug was suddenly pulled out from under you when you damaged your shoulder. What happened next?

NH: When racers stop racing , 99 per cent of them will be in their 30s. And they won’t be earning mega money, so stopping racing is a big fear – you have a lot of your life left when your career’s over, and it was a big worry for me. Just what was I going to do? I didn’t plan to retire when I did; the crash at the first round of the BSB championship that year forced my hand. That was my year done, and I remember sitting at home at the Isle of Man, thinking ‘now what?’. I thought I’d just sit back and the phone would ring and I’d be offered a really cool job. I sat looking at my phone for six months, and as you can imagine, it never rang.

As with anything in life, if you want something, you have to make it happen yourself, so I started making some calls. I can remember talking to Niall Mackenzie at length about what I should do, and he recommended I should look into doing some trackday instruction. It was great and I fell in love with it instantly; it’s so much fun, and it’s rewarding when you see the improvements made as a direct result of your feedback and input. I got a huge buzz from that…

LB: What happened next?

NH: I started doing some punditry work for Eurosport, and then I stated doing more trackdays before I got approached by Alex Lowes to manage him. Being a manager is a massive job. There’s so much to organise, and it’s far more involved than most people realise. It’s very satisfying, but it’s also a huge challenge.

LB: How did you become the face of MotoGP for BT?

NH: I was lucky. I was approached by BT and my role was initially supposed to be small. I was just going to be the in-studio guest a couple of times, but that changed to doing the first round on-site. They liked what I did, so I was asked if I wanted to do every round. I snapped their arms off.

Over the past few years I’ve grown into the job and I’m really enjoying it. This season I’m set to do the MotoGP commentary with Keith Huewen, which is a challenge in itself. For almost everyone, myself included, Julian Ryder is the voice of MotoGP, and I realise I can’t replace him. I’m going to try and offer something different, and I think my background will allow me to do this.

LB: Do you miss racing?

NH: I get asked this all the time and honestly, there’s nothing I miss about racing, nothing at all. I started racing when I was eight, and I finished when I was 36. Done. I don’t miss it. Everyone’s well shocked with that, but it’s easy to explain – it’s incredibly hard to be at that limit all the time. This always surprises people, but it’s the truth.

LB: And now you’re running your own insurance company, Mackenzie Hodgson. How did that happen?

NH: I love the TV stuff, it’s a lot of fun, but I’ve always felt like something is missing. I am such a competitive person. To be be successful at anything you have to be competitive, and I’ve only just realised that it’s this competitive element which I’ve been missing.

Mackenzie Hodgson has been going on behind the scenes for two years, and we spent a lot of time organising focus groups and seeing what riders wanted. What we quickly realised was that there were a lot of people out there who were dissatisfied with what they were being offered. Motorcycle insurance is a big market, and both Niall and myself were convinced we could offer something different.

Niall and I make a great team – he’s calm, incredibly thorough and doesn’t miss anything. I’m more spontaneous and have lots of ideas, so we complement each other.

Since the company was launched in November I have been devoting most of my efforts trying to work out how we can make the company special, and what we can do to set us apart from our rivals. We are concentrating on value. We’ve realised that not everyone wants the cheapest; if this was the case we’d all have Nokia mobile phones and be riding around on Chinese motorcycles. People want value instead For example, I personally hate it when I’m a long-standing customer and I see new people getting better deals. And then there’s the ever-increasing premiums – you’re a year older, your bike is a year older, yet your insurance premium goes up. It’s infuriating.

The insurance industry is like that, and I want to change this. This is our company – we are not paid to be the face of it – this is our business, and we are committed to making it work. We are working hard to represent the everyday biker and are going to try and reward loyalty. We have a lot of really exciting add-ons in the pipeline, and these will benefit the customer. It’s a long-term plan, and we are here to stay.

I am loving the competition, and this is what is driving me forwards. I didn’t start racing to ride round in circles, I started racing to win, and winning makes me feel good. Insurance is similar – I want to walk round bike shows and hold my head high, having created an insurance company we are proud of. All we are asking people is give us a go…

Mackenzie Hodgson specialises exclusively in motorcycle insurance, and prides itself on offering riders the right cover at a competitive price while providing the best service and attention in the case of a claim, as well as offering European breakdown cover and motor legal expenses up to 100,000 with every cover. For more details visit http://www.mackenziehodgson.co.uk or call 0330 343 8751.