Michael Rutter has taken his seventh career Isle of Man TT victory by successfully defending his TT Zero crown with Mugen setting a new lap record for the electric bikes. The Bathams Mugen rider kept clear of team-mate John McGuinness to win by 8.566s in the single-lap TT Zero race and set a new lap record of 121.91mph.

“I have been racing now for more than 30 years and I have been with Alpinestars for a good few years now. I can’t imagine wearing anything else; the fit and the feel with Alpinestars is extraordinary. It is a totally different level. If it wasn’t for Alpinestars I would have given up racing a long time ago. They are that good. Everything is done right.

“I race with an airbag. I was nervous about racing with an airbag, but I then had a crash at Brands Hatch. It was just incredible. The standard suit is brilliant and I have never had a problem with it, but the extra security from an airbag suit gives you that bit more confidence. You see the light flashing before you head out, then it goes to green…it’s so reassuring.

“I like the fact that the airbag and the back protector is all in one. I forget I have the system in the suit. Basically when you move on the bike it feels like you have room to move. It’s so unobtrusive but reassuring.

“I have been coming to the TT since I was born. I watched my dad race here and win. The TT is everything for me. I have been here as many years as I can, and I’ve missed exams at school to be here. To win a TT, I never thought I would. I have been lucky enough to win a few TTs now. The TT is the ultimate in road racing. To go off at ten second intervals and race against the clock and the road, and then standing at the podium at the end when you’ve won a race is just incredible.”

“If I could ride any bike, it would be my RCV213 race bike. It’s phenomenal. The feel of the bike, the riding style, the engine and the sound of it is just fantastic. It’s like a mini MotGP bike for the road. I just wish I was 20 years younger to have a proper run out with it.” 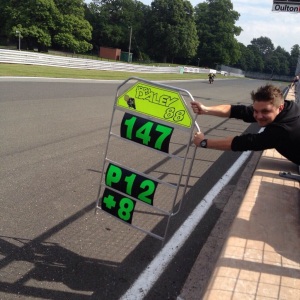 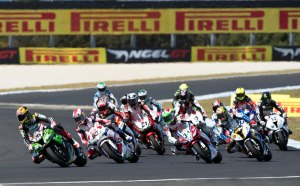 We chewed the fat with Eurosport WSBK commentator Steve Day about the state of bike racing today. Here are his thoughts:

HOW DID YOU GET INTO BIKING?

“It all started with me jumping on the back of my dad’s Honda Blackbird when I was 12 or 13. It began as a Sunday morning breakfast run but then we attended the odd BSB/WSBK race and I was hooked! I didn’t get on a geared bike proper until I was 15, after crashing my Dad’s monkey bike into anything that was parked in our field.”

WHEN DID YOU PASS YOUR TEST?

“Believe it or not, I’ve never had a bike on the road. My mum was dead against it when I was younger but when Dad started a team up to race in 1999 with a rider called Jamie Hitter, I was nudging him quite a lot to let me have a go, particularly as one of my mates had just started out in the Aprilia Challenge. I was extremely jealous and then in the year 2000, at the age of 15, my wish was granted!”

WHAT WAS YOUR FIRST BIKE?

“Dad purchased two Aprilia RS125s from Terry Rymer’s dad. I wanted one to go on the road but I was informed that it would be safer for me to just race it on circuit. He didn’t trust me to ride sensibly on the road and so we jumped in an old transit and headed to Lydden Hill for my first test, which was in all honesty a wobbly bob day.

HOW DID YOU GET YOUR JOB? WHAT ARE THE PARTICULARLY PLEASING ASPECTS?  IS THERE ANYTHING YOU DISLIKE?

“After a six year racing career, with various attempts at trying to collect points in the British Championship, a series of injuries and bad luck left me in a pickle. I knew I wasn’t going to ‘make it’, the enjoyment factor was starting to fade away and dad was spending a lot of money on a Supersport bike, so I stopped.

“In 2007, dad told me he was going into business with Dave and Bernadette Stewart (formerly Bemsee/MRO) and creating a new series called Thundersport GB. Dave said he wanted it to be televised, and while on the hunt for a presenter he offered me the placement as I was deeply bored and unhappy with life as a car salesman.

“I jumped at the chance and despite doing the first year for free, the following year I tried my hand at commentary and they said it sounded OK so I had a decision to make between presenting and commentary. I chose the latter and it’s been that way since!

“With regards to British Eurosport, the channel had covered a few of the classes within the Thundersport GB Championships with me commentating on it. I managed to arrange a meeting with the head of communcations within British Eurosport and they kindly offered me some winter sport work (another hobby) and took a risk on me by getting me involved in some motor sport work too.

“I never thought I’d get a chance to commentate on WSBK and MotoGP, as the bike’s team within the company are excellent, and so when I got the call through to say that I’d be covering Toby and Jack when their work clashes, I was jumping around the room with excitement, it was a dream come true.

ANY ISSUES IN BIKING THAT PARTICULARLY GRATE? ANYTHING THAT’S WORTHY OF PRAISE? ANY IDEAS HOW TO GET MORE YOUNG BLOOD INTO BIKING?

“The only thing that grates on me is an issue that will remain completely out of my hands forever, and it’s to do with circuits on the world calendar. In Europe we have the finest venues around, and due to financial reasons we tend to lose one or two of them per year. I just don’t want it to go the F1 route where we end up with a lot of random events around the globe and lose the gems that make racing what it is. I’m not the one in business though so I can understand the decisions, it just makes me feel a little sad more than anything else!

“As for young blood in biking, at present we have a good bunch of stars that can make names for themselves but it’s definitely the next generation that is worrying. The Racing Steps Foundation have done a great job with the team and set-up they have in the Spanish Championship with McPhee, Rogers and Ryan, but it’s getting the youngsters to Spain and being able to fund it that’s the big problem.

“Thundersport GB as a club has a super system with riders aged 12-18 being able to start out in the Aprilia Superteens, move onto an Aprilia 450 and so on. I know they have some big ideas for the future too so that we can get more riders into the Spanish and GP paddock, but it takes time and it’s a great shame that, as a nation mad on bikes, we’re unable to remotely compete with Spain in terms of rider development.”