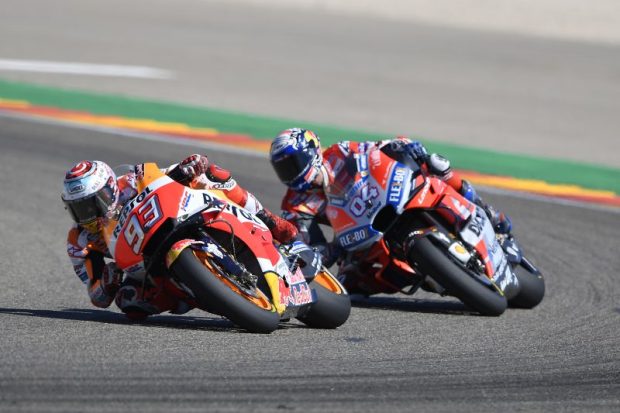 Repsol Honda’s Marc Marquez demonstrated his cunning and racecraft in an intense MotoGP race at the MotorLand Aragón circuit in Spain, taking victory ahead of Ducati’s Andrea Dovizioso after a hard fought battle between the title rivals.

Temperatures soared to their highest point of the weekend as the riders lined up on the grid, causing many teams to make last minute changes to their chosen selection of race rubber, in readiness to combat the heat.

As the race began the track thermometer was reading 45°C – higher than it has ever been at the Aragón circuit for a MotoGP event – and following all the changes, five of the six allocated tyre compounds were now featured in different combinations throughout the field.

Ducati’s Jorge Lorenzo was on pole after an exciting qualifying session on Saturday, which saw him take the first grid spot in the very last moment of the session. However, the Spaniard’ race was short-lived as he crashed out on the first corner after a late lunge by Marquez forced Lorenzo onto the dirty part of the track. Lorenzo had two choices; run wide and lose places, or force the bike to take the line he wanted. The Spaniard chose the latter, was too greedy with the gas and highsided out of the race.

This immediately handed the lead to his Ducati team-mate Andrea Dovizioso, a position he held for the next 13-laps, before coming under pressure from Marquez.

The pair then duelled out the remaining 10-laps of the 23-lap race, with the lead frequently changing hands as they pushed their tyres to the limit on a track that now had diminished grip levels due to the increased heat.

Marquez was using a hard front and soft rear pairing, while Dovizioso had gone for a hard/hard combination and the two battled it out for the final laps, and it was Marquez who had more rubber left, pulling out a slender lead to cross the line first, ahead of Dovizioso and Suzuki’s Andrea Iannone.

Marquez said: “I woke up this morning with the idea that today I could take a risk. I hadn’t felt totally at ease during the weekend with the hard rear spec tyre so, after the warm-up, I said to my team that I wanted to use the soft rear. That started many meetings and discussions but in the end I won the race because I could convince my box to take that gamble! In the end, it was the correct choice. I had a good start but soon after I almost lost the front in a dirty spot on the track, so I had to release the brakes and go a bit wide. I didn’t realize until the end that Lorenzo had crashed.

“Anyway, the fight was very tight with Dovi and Iannone as well; it was a hard fight but within the limit. This is MotoGP, and it’s what the fans enjoy to watch. Motorland is one of my favourite tracks, and I enjoyed so much riding here over the weekend even if the pressure was high, with events, people, and many things to do every day. I mean, it’s good but also demanding. Even with this, I managed to remain focused, work well with the team, and ultimately to stop Ducati’s momentum. This morning I listened to “In my feelings” from Drake and in the honour lap I thought back to that song and it was great. Anyway, now more than ever it’s the moment to keep calm and manage well the race weekends because I want to win the Championship and to do that you must remain fully concentrated.”